Check here for updates on how we are operating under Covid restrictions. 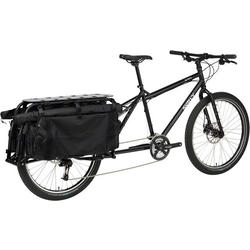 Surly Big Dummy - 2019
$2,249.00
Big Dummy is a long-tail cargo bike, which means that not only can you haul a serious amount of cargo, different accessories can be added to your Big Dummy frame and deck depending on what you want to carry. Being a dedicated single-piece frame, instead of an add-on to an existing bike, it's stiffer and resistant to torsional flex, which provides a better ride and longer lasting frame than long-tail add-ons. Like all Surly's frames, it's made of their size specific, 4130 CroMoly steel – a tube set engineered for cargo that sports lots of little touches that you've come to love in a Surly, like clearance for big tires and the use of common component sizes. Figure on being able to carry about 200 pounds (90kg) of cargo. The load weight, and how it's loaded, will affect the handling somewhat. Also, plan on using gears, especially as cargo weight increases. This may seem obvious, but as you get comfy with it, you will use your full range of gears as never before. The parts kit is good quality, and suitable to loaded as well as unloaded riding. It's got a 3x10 drivetrain, Avid BB7 disc brakes, quality Shimano Deore hubs, and 26x2.3" Kenda Kiniption tires. They've outfitted it with Surly-designed bags, deck, rails and Dummy Rail Collars; everything you need for the majority of stuff you might carry, like groceries, shovels, bags of charcoal or mulch, guitars, lamps, mannequins, whatever. Bags, deck, rails, and rail collars are all designed to improve on previous offerings and work together to make sure your stuff is transported with safety and stability. It's an unbending interface, which when you're carrying lots of cargo, is a good thing to have. Get creative, and get hauling. If you intend to carry a passenger on your Big Dummy, Surly requires use of their Dummy Rail Collars. These provide a secondary retention system for the rack, as well as stiffen the rack system. These are included with current Big Dummy bikes and frames, as well as available for older Big Dummy bikes and frames (compatible with all generations of Big Dummy bikes/frames). In addition, a stoker handlebar set up, found on tandem bicycles, is recommended as well. Make sure to check with seat post manufacturer for stoker handlebar compatibility. If you are planning to carry a child on your Big Dummy, Surly recommends the use of a child seat. They've tested the Maxxi Yepp seat. Yepp makes an adaptor that allows their seat to mount onto Surly's deck. It works well with the Big Dummy. At this time other child seats are not recommended and will void your warranty. Surly is testing other options. For the most up to date compatibility/options, check http://www.surlybikes.com/safety Note: keep in mind Big Dummy weight limits when carrying a passenger. 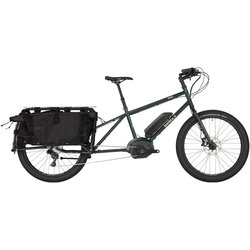 Surly Big Easy - 2020
$5,249.00
Riding with cargo is core to Surly's mission on this earth, whether you’re running a front rack and bag setup or a full-blown cargo bike and trailer. There are times, however, when even the strongest riders are limited in what they can haul, so Surly created Big Easy, their long-tail electric cargo bike. Consider it the 18-wheeler of the cargo bike world, minus the diesel fumes. When it comes to geometry, Big Easy rides and feels like a normal-length bike. It has increased stand-over height clearance and they threw in a dropper post to promote bike sharing across different-sized riders. So, whether you want to wave goodbye to the old family gas hog, upgrade your bike-supported business’s two-wheeled fleet, or simply haul more bowling balls during your daily commute, Big Easy makes doing all that, well, easy. - Full component set perfectly suited for electric cargo bikes, including four-piston Tektro brakes - Equipped with Bosch Performance CX, their most powerful drive unit - Capable of running dual batteries for extended range, if you’re into that. (All mounting hardware and wiring included.) - Damping headset provides smooth and stable handling characteristics under heavy loads - Condensed bike size range and dropper post routing to promote bike sharing and to accommodate more riders per frame size - Includes Bosch Standard 4A charger, wiring harness, and brackets for additional battery 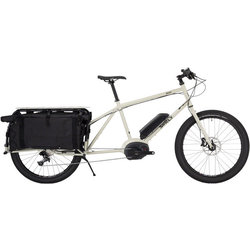 Surly Big Fat Dummy - 2019
$3,175.00
The Big Fat Dummy is a long tail cargo bike that took a few too many doses of growth hormones. At first glance, you might say that Surly just put bigger tires on a Big Dummy. But if you said that, you'd actually be very wrong so just… don't. Think of Big Fat Dummy as more of a second or third cousin to Big Dummy rather than a brother. They share some of the same DNA and look sort of similar, but they're two very different bikes and really only interact when they both reach for the potato salad spoon at that family reunion that no one really wants to be at anyway. Now that that's out of the way, let's get down to the nitty gritty of what makes this hulking beast of a bike tick. Surly's goal with designing a cargo bike around fat tires was to create the most stable, stiff, and traction-laden ride possible while hauling a ton of stuff. Big Fat Dummy has a longer toptube and slacker headtube than its more svelt cousin giving it a nice, predictable, and stable ride. They also used thinner, lighter tubing to construct its cargo area so while it's an overall burlier bike, there's not much difference in weight. Big Fat Dummy accepts either 10mm or 12mm axles in the rear with a spacing of 190/197mm. That big ol' spacing equates to one thing: tire clearance for days. Big Fat Dummy maxes out at a massive 26 x 5.25" tire.* While that large of a tire provides the most traction and stability a bike can possibly offer, it's also a lot of rubber to push and might not be for everybody. Luckily, Big Fat Dummy is also a blast to ride with 3" tires too. It uses the same 100mm suspension-corrected fork as the Wednesday, meaning if you want to add a little squishy squishy to your ride, you can throw a Bluto on and let ‘er rip. If you intend to carry a passenger on your Big Fat Dummy, Surly requires use of their Dummy Rail Collars. These provide a secondary retention system for the rack, as well as stiffen the rack system. In addition, a stoker handlebar set up, found on tandem bicycles, is recommended as well. Make sure to check with seat post manufacturer for stoker handlebar compatibility. All Big Fat Dummy framesets and bikes ship with a Dummy deck, rails, bags, and the aforementioned Dummy Rail Collars so you can immediately start hauling cargo — human or otherwise. Big Fat Dummy is ready and willing to carry all sorts of crap — literally. It's already in use on an organic farm in Ecuador so it's likely that it's hauled some form of manure by now. *Using a 26 x 5.25" tire will cause some drivetrain limitations.
Page 1 of 1